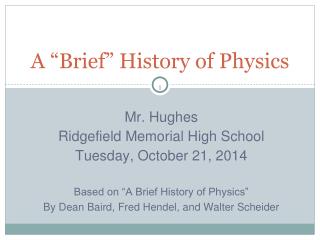 A “Brief” History of Physics A “Brief” History of Physics. 1. Mr. Hughes Ridgefield Memorial High School Tuesday, October 21, 2014 Based on “A Brief History of Physics” By Dean Baird, Fred Hendel, and Walter Scheider. I. In the beginning…. 2. Physics began when the first thinking creature wondered, “why?”

A “Brief” History of Physics

UNI Physics - . robotics. outline. minisumo robotics has been an important feature of the uni physics curriculum since

The Impact of the History of Physics on Student Attitude and Conceptual Understanding of Physics - . sarah garcia, april

The Trebuchet History and Physics of Mechanical War Engines - . sling. the shepherd’s sling is one of the oldest

History of Physics Lecture 9 - Thermodynamics was one of the main themes in the physics in the 19th century. it lead