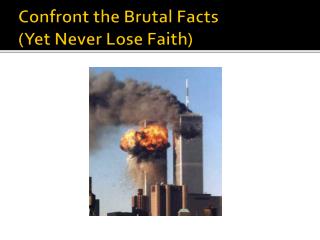 Confront the Brutal Facts (Yet Never Lose Faith). The Great Atlantic & Pacific Tea Company and Kroger were both old companies heading into the 1970s After society recovered from the World Wars and the Great Depression, the grocery store industry started to change. Good… The Enemy of Great - . applying jim collin’s good to great to the fraternity chapter. six characteristics to go

Overview of Good to Great - . good to great. the commonalities between all the good to great companies: level 5

Questions? - . how do you lead your staff to confront the brutal facts yet never lose faith? how will you set fcat

Facts About Shipping Industry - Doing universal shipment and worldwide moving is energizing, yet it can likewise be

There is no faith that has yet never been broken, - Except that of a truly faithful dog. ~ konrad lorenz. there is no