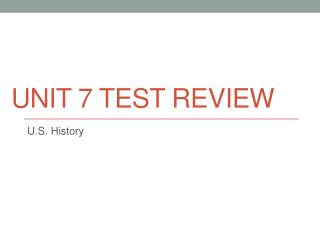 WWII Unit Test Review - . review for the test. view this review as a slide show to reap the benefits of the review. read

Unit 9 Test Review - . the test will consist of 25 multiple choice questions. please bring a calculator and a #2 pencil.

Unit 2 Test Review - . the dawes act was passed in an effort to do what to the native americans?. chapter 5

Review for Unit Three Test - . the constitution. set up a framework for government, but didn’t predict or endorse

Unit 5 Test Review - . read the questions, answer them, then create a statement in your notes. the ruhr is a region of

Unit VIB Test Review - . q: simon bolivar was inspired by the a: enlightenment and american revolution q: king of prussia

Unit 2 Test Review - . which of the following was not a major achievement of the egyptian culture? could set broken bones