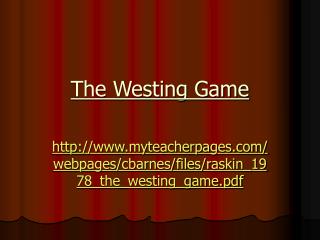 The Westing Game. http://www.myteacherpages.com/webpages/cbarnes/files/raskin_1978_the_westing_game.pdf. Lesson One Learning Target: To understand the elements of the mystery genre. THE JEOPARDY GAME OF GOVERNMENT PUBLICATIONS - . when you know the answers, you can help your patrons. wednesday 1 may

The Explosive Pistol Run Game - . by james vint coachvint@gmail.com. “if you have a systematic way to teach an offense,

Mirza vranovic - . game design. 1/30/14. mirza vranovic. -today we talked about good game elements. -there was a