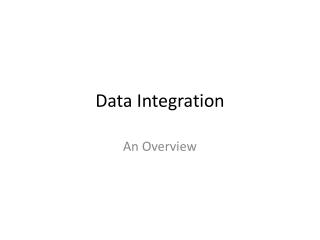 Data Integration. An Overview. What is Information Integration and Why is it important. Some of the upcoming slides are from William Cohen’s tutorial on information integration (WebDB 2005). To illustrate the problems, we focus here on this aspect. Linkage. Queries. XML in RDBMSs - . why bother?. most (structured) data stored in rdbms seamless integration of xml and rel. data exploit

100 Day Post-Merger Integration Plan - . agenda . the purpose of today’s meeting is to secure gai’s commitment to the

Chapters 5 and 6: Numerical Integration - . definition of integral by upper and lower sums. application to monotone