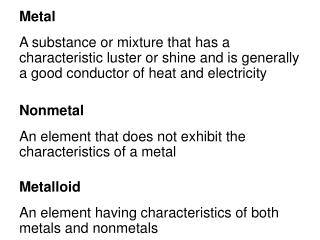 Metal - . an element with a distinctive set of physical properties: luster, good conductor of heat and electricity,

Metal - . heavy metal. heavy metal (often referred to simply as metal) is a genre of rock music that developed in the

Metal - . which of the following metals are firstly used by human? gold silver copper bronze iron. only (i) and (ii).

Scrap Metal Recycling For Reusing Metal - Recycling has been a huge and profitable activity in the recent times. people