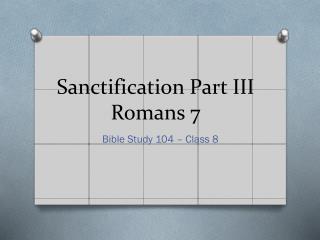 Sanctification Part III Romans 7. Bible Study 104 – Class 8. Summary. Romans 6 instructs us that righteousness is a requirement for the Christian. Romans 7 - 14 we know that the law is spiritual; but i am unspiritual, sold as a slave to sin. 15 i do not understand

Romans 7 - . the good, the bad, and the ugly the struggle of law, grace, and the believer that cares about their fruit.

Sanctification - . jesus became for us i corinthians 1:30. wisdom from god righteousness sanctification redemption.

Romans Part 2 - . lesson 4. what is romans 6:1-7 about?. the righteous died to sin with christ they don’t continue

Romans 13:7 - . “render therefore to all their due: taxes to whom taxes are due, customs to whom customs, fear to whom

2 Lapses from Sanctification - . i corinthians 6. a review. chapter 1: overview – cliques / distortion of wisdom