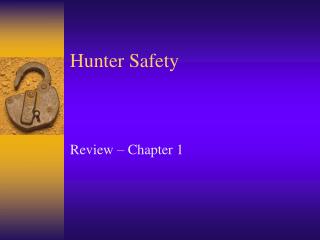 Hunter Safety . Review – Chapter 1. What is Safety and What is an Accident?. Safety is preventing accidents from happening Accidents are unintentional or unexpected happenings with someone or something being hurt or killed as the result. What Are the Three Keys to Safety?. Attitude Skill HUNTER SAFETY AND RESPONSIBILITY - . the true sportsman. introduction. to give an understanding of the causes of hunting

Hunter College Department of Public Safety - . fire safety. according to fema. in cases where fatalities occurred on

Hunter Nope - . my science project. mass. the amount of matter in a object. weight . a measure of the heaviness of an

Hunter - gatherer - . people who survived by searching for wild plants and animals to eat. pre-history. – the time

BY: HUNTER - Lloyd agustus hall. what would jesus do. by: hunter.

shadow Hunter - . by: neil patel. background. his parents deserted him when he was 3 months old, and gave him away to a