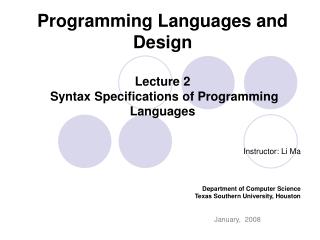 About PL/SQL - . pl/sql is an extension to sql with design features of programming languages. data manipulation and query

LECTURE - . introduction to programming logic and technique. dtnhung – niit haiphong. start-up. can you list a serial

Coding vs. Programming - . from http://thinkaround.blogspot.com/2006/01/coding-vs-programming.html coding is about how

Programming Languages 2nd edition Tucker and Noonan - . chapter 2 syntax a language that is simple to parse for the