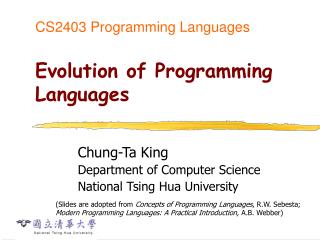 Immutability FTW! - Presented at accu conference (11th april 2014) "when it is not necessary to change, it is

Declarative Thinking, Declarative Practice - Presented at 8th light university london (13th may 2016) do this, do that.

Chapter 1 - . preliminaries. purpose of this book. to examine carefully the underlying concepts of the various constructs

Structure and Abstraction in HOT Languages - . a comparison of polymorphism, modules, and objects david macqueen bell

C++ Programming: From Problem Analysis to Program Design , Fifth Edition - . chapter 1: an overview of computers and

03-60-440: Principles of Programming Languages Classification of programming languages - . “there are only two kinds of