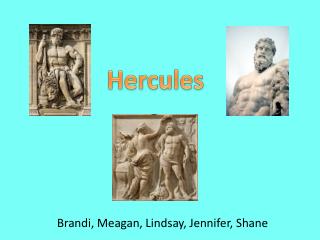 Hercules. Brandi, Meagan, Lindsay, Jennifer, Shane. Birth. Born in Thebes Son of Zeus and Alcmena “…who had visited Amphitryon’s wife, Alcmena , in the shape of her husband when the general was away fighting.” (Page 228) Thought to be son of Amphitryon Has a half brother, Iphicles By: Brandi and Jennifer - Famine. by: brandi and jennifer. what is famine and where is it?. famine is extreme and general

Meagan Farmer - . is-003 exam 4. meagan. i was in the army . art. game night. lyric aidryn marie. my beautiful daughter.

by Brandi Lee - . : summary on: what revolution? how feminism changed religious colleges while they weren’t looking

Lindsay dentist - With the rising popularity of invisalign, many of us are curious to find out which one is more suitable

By meagan Please enjoy - My i can statement is: identify the life stages of different plants, include the bean plant we

Shane Meadows - . about . shane meadows was born on the 26 th of december 1972 he is an english film director, screen