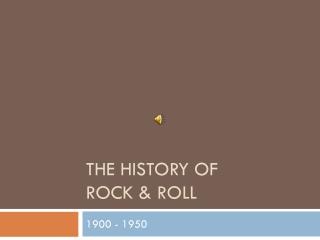 THE HISTORY OF Rock & Roll. 1900 - 1950. Introduction. In the world today, it would be extremely rare to find a person who has not been exposed to, or even saturated with, rock and roll during most of their life. History of Rock and Roll Introduction - . what is “rock and roll” and who coined the term? answer on slide 142. rock

THE GAME OF PIG - . probability and expected value. the game of pig. if you roll a 1, then your turn is over. roll a six

The color of the sun - . five hundred products. plan your day. answer my questions. remember my order. i am certain. i

Time and Change - . chapter 4. section 1 earth’s history. objectives: describe the origin and early history of the

Mineral and Rock Resources - . mineral and rock resources . virtually everything we use or build or create in modern life