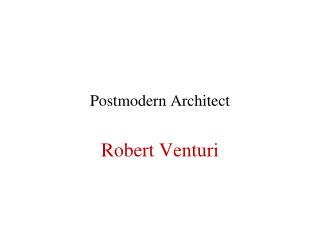 Postmodern Radicalism - . the ethics of extremism. nietzsche’s “last man”. what unites all of these readings is

Postmodern Theory - . modernism. the belief that all knowledge can be reduced to knowable segments or truths by using the

Postmodern Urbanism - . toronto as an example. outline. clarification of terms: postmodernism, postmodernity and

POSTMODERN ARCHITECTURE - . postmodernity in architecture is said to be heralded by the return of &quot;wit,

Postmodern ethnography The postmodern turn in anthropology - Ethnography. a research process in which the anthropologist