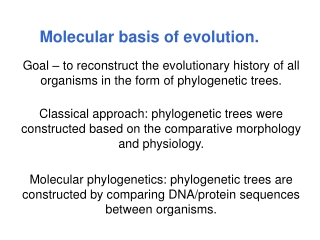 Molecular basis of evolution. Goal – to reconstruct the evolutionary history of all organisms in the form of phylogenetic trees. Classical approach: phylogenetic trees were constructed based on the comparative morphology and physiology. Exploring Molecular Evolution using Protein Electrophoresis Is there something fishy about evolution? - . bio-rad

THE MOLECULAR BASIS OF INHERITANCE - . announcements. second set of genetics problems has been posted!!. objectives. know

Lesson Overview - . 17.4 molecular evolution. think about it. the analysis of genomes enables us to study evolution at

CARCINOGENESIS: THE MOLECULAR BASIS OF CANCER - . nonlethal genetic damage lies at the heart of carcinogenesis. mutation)