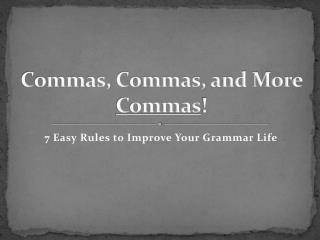 Commas, Commas, and More Commas !. 7 Easy Rules to Improve Your Grammar Life. Rule #1 (Review): Items in a Series. A series consists of three or more items of the same kind written one after the other in a sentence. Always place the comma before the conjunction . All About Commas - . krystal geary josh mazzacua shanna todd. what is the purpose of commas?. commas are used to add

Using Commas - . vicki martinez. commas. when you speak, you pause briefly between words. in order to show a reader where

Commas, Commas, commas - . the boy worked his paper route, cleaned his room, and walked to school by 8:00 a.m. (commas

Day 3 Commas 2 - . commas… to set of nonrestrictive phrases and clauses. use commas to set off information that is not

Commas #1 – Dates and Addresses - . “the pause that refreshes”. why do we use commas? . commas are a type of

Commas - . the serial comma. commas are used to separate items in a series. when mary walked into the classroom, she saw

Commas in a Series - . objective: use commas to separate items in a series. when you talk, you often pause briefly as you

Commas and Semi-colons - . mrs. murdock happy first day of spring!. rules with commas. use commas to: separate items in a

Commas and Semicolons - . why do we love them so much?. i commas [,]. commas clarify meaning and set sentence meter for