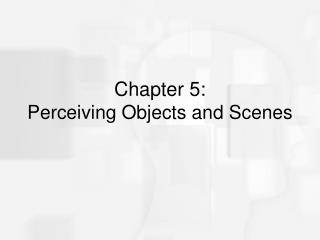 Chapter 5: Perceiving Objects and Scenes. Modern Technology. What would it take to build a car that could negotiate a neighborhood with a human at the wheel? Already have cars that hit the brakes if object blocks the path when backing up. Cars that nudge you if cross center line. Chapter 2 Using Objects - . chapter goals. to learn about variables to understand the concepts of classes and objects to

Chapter-3 Falling Objects and Projectile Motion - . overview. explore how objects move under the influence of gravity

Perceiving the Self and Others - . chapter 2. perception. a cognitive process through which we interpret our experiences

PERCEIVING - . the most successful christians are those who perceive and honor their spiritual pastors, leaders and

Chapter-3 Falling Objects and Projectile Motion - . overview: explore how objects move under the influence of gravity

Chapter 2 Introduction to Classes and Objects - . outline. what is an object? creating objects how methods work computer

What we do and don’t know about perceiving figures and segmenting objects - . what we know simple and complex cells can

Chapter 6 Objects and Classes - . she calls out to the man on the street sir can you help me … oh think twice it's