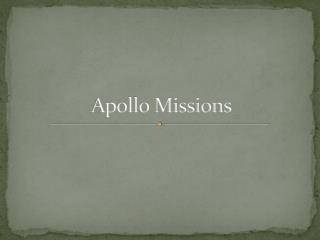 THE APOLLO MISSIONS - . by: gabrielle van sant. apollo 1. apollo 1 had a big fire during training and killed 3 people.

A History of NASA: Mercury, Gemini, and Apollo Missions - . dr. lafever and her 2 nd and 3 rd hour classes of parkway

Apollo - . by francis bae. what he is famous for. apollo had a big herd of cows and his nephew (also god) hermes stole

Apollo - . made by kobe northrip adventures of apollo!. who is apollo?. apollo is the god of poetry, beauty ,youth

APOLLO - . god of light and music and purity. http://www.theoi.com/image/img_apollon.jpg. birth of apollo. born from zeus

Apollo - . powers and symbols. 1. the god who punishes and destroys ( oulios ) the wicked and overbearing. his arrows are

Apollo - By: aaron sayers. apollo. god of light and the sun among many others. also called “phoebus” (radiant or

Apollo - . done by jacus pek le xuan yap kai herng. planet . a planet is an object orbiting the sun, has enough mass to

Apollo - The god of sun. apollo. leto, (apollo’s mother) had an affair with zeus and was soon to have a child. hera was

Apollo - . by ah. what is apollo the god of?. god of shepherds, music, poetry, archery, healing, prophecy, purification,