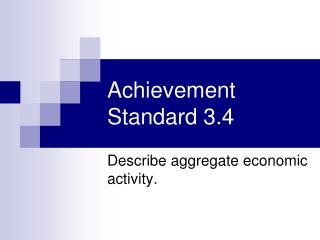 Achievement Standard 3.4. Describe aggregate economic activity. Aggregate?. The amount or total formed from separate units. Aggregate refers to a total, everything added up. Aggregate = Total The economy can be viewed as a series of aggregates, flowing together to make a working whole. Reading Standard 3.4 - . identify and analyze recurring themes across works (e.g., the value of bravery, loyalty, and

Achievement Standard - As 91581 . achievement standard. ppdac cycle. one of the principles: grade distinctions should not

SC Standard 8-3.4 - . explain how igneous , sedimentary and metamorphic rocks are interrelated in the rock cycle.

Achievement Standard 3.5 - . no – it’ll ring your bell. will it be like this???. investigate a language topic and

Lets get active Achievement standard 1.1 - . hauora total wellbeing . hauora. hauora is a concept that refers to a way we

3.4 - . multiplying polynomials. multiplying monomials. to multiply exponential forms that have the same base, we can add

3.4 - Velocity and acceleration. 3.4. given that f(t) is a position function relating distance in terms of time. speed is

3.4 - . measures of position and outliers. the z-score. example using