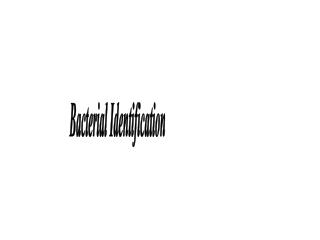 Bacterial Identification. streptococci. Gram-positive cocci Facultatively anaerobic Occur in pairs and chains of varying length. Catalase negative They are usually classified based on their hemolytic properties on blood agar and according to their serologic groups. Identification technique Bacterial Growth curve Bacterial reproduction - . staining. stain is a salt with a negative and

Bacterial Growth - Hi kids. keep up the good work! i made some comments and corrections for you. corrections are mostly

Bacterial Cells - . how is bacteria a part of recycling and biodegrading? it breaks down organic material for plant roots

Bacterial cloning - . especially of pcr product dna. pcr recap. pcr gel product. cloning. cloning is the way in which we