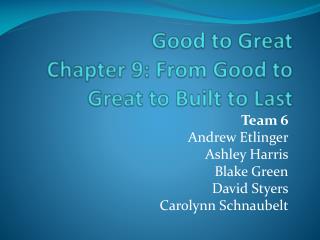 Good To Great Jim Collins - . trent hemann bunde walker james yost. good is the enemy of great. easy to settle for being

Good to Great - . first who…then what. getting the right people. 3 truths:. begin with “who” how to motivate and

Moving an Organization from Good to Great Based on the book by Jim Collins - . john c. smith chief executive officer tma

Chapter 10 - . sumeria had sargon the great. china had yu the great. persia had cyrius , darius, and xerxes…all “the

Gali and Gambetti On the Sources of the Great Moderation - . good luck? ………. no major shocks good practice? … jit

g2g Good to Great - . leading the good to great movement in your sch ools. how good do you want to be?. good is the enemy

Good To Great Chapter 5 - . the hedgehog concept. are you a hedgehog or a fox?. “the hedgehog and the fox” by isaiah

What makes a good Medical Assistant Great!! - . by: kristan cox rma. what is the difference between a good medical