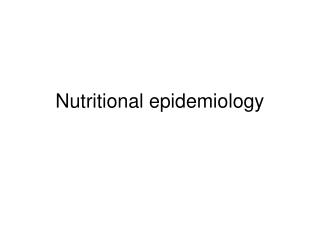 Epidemiology - Principles of epidemiology. communicable diseasedisease transmitted from one host to anotherin order for

Epidemiology - . unit 1: what is it about?. definition. distribution, frequency and determinants of health problems and

NUTRITIONAL EPIDEMIOLOGY - . the study of eating behavior and how it influences the etiology, occurrence, prevention, and

269 CHS 1 Nutritional Epidemiology What is it How is it important - Introduction. many of the major questions about diet

NUTRITIONAL FACTS - . nutrition label. serving and serving size. this gives you the size and total number of servings in

Nutritional Assessment - . nutritional assessment is focused on:. the amount of food and fluids consumed in relation to

Epidemiology - . the study of occurrence, distribution, and transmission of diseases in humans. epidemiologist. a

Nutritional Needs - . food, nutrition , nutrients. food: anything solid or liquid which when swallowed ,digested and

Nutritional Assessment - . definitions. estimated average requirements(ear) are expected to satisfy the needs of 50% of