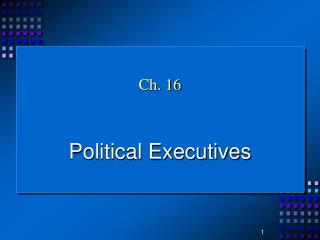 Ch. 16. Political Executives . Who’s who in the executive?. The executive is, technically, the branch of government that is responsible for the execution or implementation of policy. Head of state: an office of formal authority and largely symbolic importance. Ch 16 - . non renewable energy by: sean nobles and lexus reed. what are the advantages and disadvantages of conventional

Ch. 16 - . the search for the genetic material led to dna. experiments with bacteria and, later, with phages provided the

Ch. 16 - . driving on highways. key idea. this chapter discusses ways to manage risk when entering, driving on, and

Ch. 16 - . the economy and work. overview. modern economy originates with the information revolution and

Ch 16 - . the dynamic ocean. surface circulation. surface currents movements of water that flow horizontally near the

Ch. 16 - . sound and light. sound. sound wave: caused by vibrations and carry energy through a medium. properties of

Ch. 16  Solutions - . solutions are homogeneous mixtures that may be solid, liquid or gas. alloy. formation of a