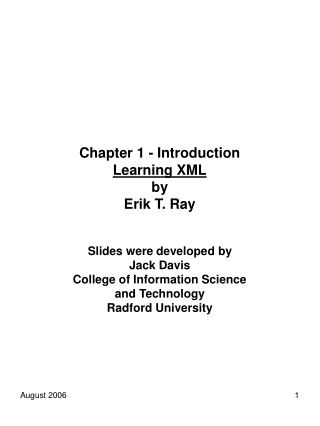 Chapter 1 - Introduction Learning XML by Erik T. Ray. Slides were developed by Jack Davis College of Information Science and Technology Radford University. What is XML?. XML stands for “Extensible Markup Language XML is a “metalanguage” that can be used to create markup languages Chapter 1 Introduction Learning summary - . by the end of this chapter you should know: how accounting affects and is

Introduction to XML 1. The XML Language - . tim brailsford. markup languages. the word “markup” is derived from the

XML introduction - . what is xml? examples of xml use a xml document structuring data with tags more about tags. what is

Chapter 1 Introduction - . goals. why the choice of algorithms is so critical when dealing with large inputs basic

Chapter 1: Introduction - Our goal: get “feel” and terminology more depth, detail later in course approach: use