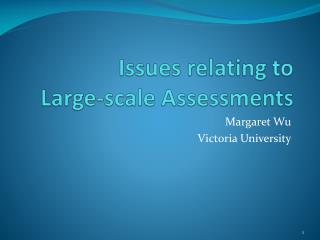 LARGE - SCALE ASSESSMENTS - . by: michele leslie b. david mae-im. wide usage. to identify students who may be eligible to

Some initial thoughts on issues relating to Large Facilities - . mark coles draft – to review with tom cooley. high and

Book 3: Use of Accommodations in Large-Scale Assessments - . practical guidelines for the education of english language

Relating Scale Drawings to Ratios and Rates - . what are possible uses for enlarged drawings/pictures? what are the

Introduction to Large Scale Change - . overview. what do we mean by ‘ large-scale change ’ (lsc)? emerging model of

Large Scale Drupal - . at the university of oregon. the problem. a department hosts their own website on aging