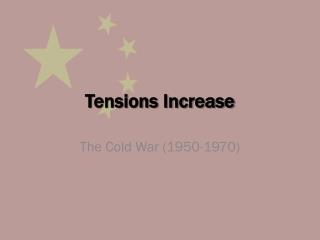 Tensions Increase. The Cold War (1950-1970). The Chinese Civil War (1946-1949). Following World War II and the removal of the Japanese from China, China fell into a civil war between two major groups: the Nationalists and the Communists. Who won? What was the end result?. The Communists GROWING TENSIONS - . north begins to rely on industry and commerce and the south starts to rely on plantations and

Tensions Rise - . mrs. carter us history sol 4. navigation acts. all goods imported or exported from the colonies had to

Social Tensions - . british rule. situation for the canadiens. even though the canadiens were still the majority , the

Cold War Tensions - . objectives. understand how two sides faced off in europe during the cold war. learn how nuclear