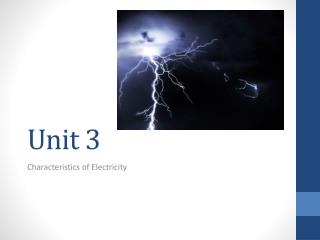 Unit 3. Characteristics of Electricity. Unit 3. Electrical energy has allowed us to develop technologies that have enhanced our way of life. Hybrid. Hybrid vehicles are often used today where, one part of the vehicle uses a gasoline powered motor and also energy from an electrical motor