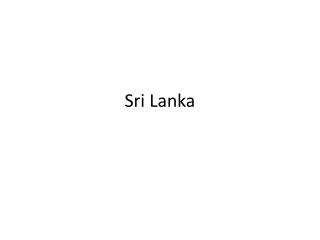 Sri Lanka. Land and Climate. The island nation of Sri Lanka sits fewer than 20 miles off the coast of India. Covering 25,332 square miles, it is slightly larger than West Virginia. About 32 percent of the land is forested (down from 80 percent due to deforestation). Sri Lanka - . paul. flag. on the flag of sri lanka, it has yellow, one lion, red, orange, four papers and one sword.

SRI LANKA - . the “h” is silent!. famous for exports of tea, coffee, rubber, and cinnamon speak sinhalese and tamil

Sri Lanka - . history:. under british control from 1815 until independence in 1948 name changed from ceylon to sri lanka

Visit sri lanka with sri lanka tourist visa - Are you planning for sri lanka?sri lanka travel guide will help to get a