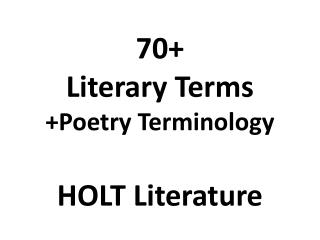 70+ Literary Terms +Poetry Terminology HOLT Literature. tone. tone. the writer’s attitude Ex: optimistic, argumentative, lighthearted, etc. claim. claim. 1. to demand by or as by virtue of a right; demand as a right or as due: to claim an estate by inheritance. LITERATURE Terminology - . what is poetry?. a type of literature that expresses ideas, feelings, or tells a story in a

Bell Ringer: March 5, 2013 - . tell me as much as you can about poetry. think of poems you know, what kind of poems there

Poetry Terminology - . english 10-2. imagery. words or phrases that stimulate one of the five senses (hearing, taste,

Poetry Terminology - . alliteration. definition: the repetition of consonant sounds at the beginning of words or within

Poetry Terminology - . rhythm - the natural beat or movement you feel as you read a poem.rhyme - a repetition of sounds

Poetry Terminology - . alliteration the repeating of beginning consonant sounds as in “ creamy and crunchy. ”

Responding to Literature (Writing About Literature) - . why do you read literature? (all fiction, poetry, drama, and

Prose &amp; Poetry - . who’s in your little black book?. the event:. the performance of literature prose –