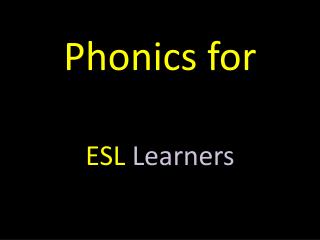 PHONICS FOR KIDS - Teach your kids to

Phonics for Parents - . why phonics?. not the only way, but the most effective way for most children to learn to read

Phonics - Learning at home. 25.10.13. phonics. in phonics last week: we learnt how to recognise and write the letters in

Phonics - . welcome to phonics for parents. aims. to introduce the main features of our phonics programme to give advice