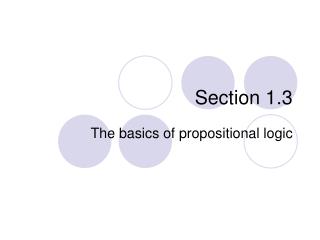 Section 1.3. The basics of propositional logic. Liars and Truthtellers. Raymond Smullyan has written a number of wonderful books filled with challenging logic puzzles. A recurring theme in these books is an Island where each inhabitant is either a Liar or a Truthteller. Here is an example: Section 1.3 - . the language of sets. objective. use three methods to represent sets. define and recognize the empty