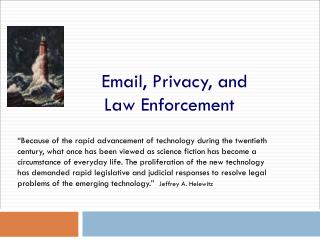 “Because of the rapid advancement of technology during the twentieth century, what once has been viewed as science fiction has become a circumstance of everyday life. The proliferation of the new technology has demanded rapid legislative and judicial responses to resolve legal Email, Privacy, and Law Enforcement - “because of the rapid advancement of technology during the twentieth century,

History of Law and Law Enforcement - . l.e. class. justice system. punish the offender there was no attempt at

Beyond “I Fought The Law” Educating Law Enforcement about Privacy Services - . adam shostack (presented at