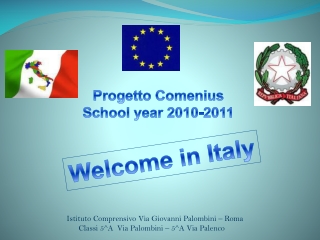 Progetto Comenius School year 2010-2011. Welcome in Italy. Istituto Comprensivo Via Giovanni Palombini – Roma Classi 5^A Via Palombini – 5^A Via Palenco. Welcome to Italy - Today we will be traveling to rome, italy! click on the star to take you inside the city!. welcome to

Welcome to Italy !! - . now you are in italy ! the red region is apulia ! italy looks like a boot and apulia is its hell!

Welcome to Cultural Italy - At cultural italy, you will find expert italy travel agent trip planners, who will help you

Welcome to Scuola Media Santini in Italy - . our school. our school is situated in marina di pietrasanta a small

Welcome to the land of Italy - . flag of italy. map of italy. next. let us travel to the tourist

Education in Italy - . from nursery school to…. university and mo re. organisation. italy has both public and private

Christmas in Italy - . by meg swanson december 2012. fact 1. buon natale is how you say merry christmas in italian. fact

CHRISTMAS IN ITALY - . most of us usually decorate the christmas tree on 8th of december. our presepe is a

Fascism in Italy - . how &amp; why did fascism rise in italy?. dissatisfaction and unrest mussolini changes