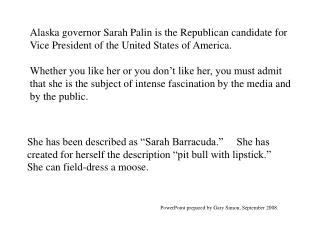 Alaska governor Sarah Palin is the Republican candidate for Vice President of the United States of America. Whether you like her or you don’t like her, you must admit that she is the subject of intense fascination by the media and by the public. Prepared by: Gary Jacobi - . extent of cca treated wood in consumer mulches and methods of detection. mulch made from