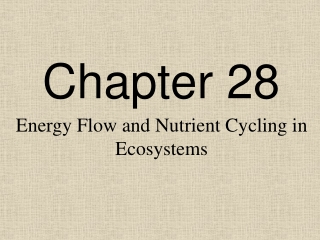 Chapter 28. Energy Flow and Nutrient Cycling in Ecosystems. 0. How Do Nutrients and Energy Move Through Ecosystems?. All ecosystems consist of two components Biotic - living organisms in a given area —bacteria , fungi, protists , plants, and animals Chapter 28 - . special relativity. 28.1 events and inertial reference frames. an event is a physical

Chapter 28 - . new frontier a nd the great society. followed launch of sputnik, u-2 incident, and cuba’s alliance with

Chapter 28: - . the new frontier and the great society. who won the election of 1960?. democrat john f. kennedy won over

Chapter 28 - . an introduction to animal diversity. characteristics of most animals. 1. multicellular eukaryotes 2. cell

Chapter 28 - . nuclear chemistry. special note. we are not going to cover section 4 in chapter 28. we are only going to

Chapter 28 - . protists. overview: living small. even a low-power microscope can reveal a great variety of organisms in a