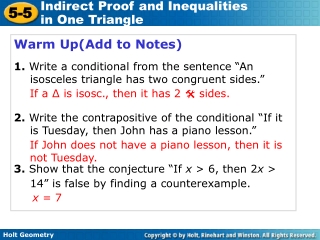 Warm Up(Add to Notes) 1. Write a conditional from the sentence “An isosceles triangle has two congruent sides.” 2. Write the contrapositive of the conditional “If it is Tuesday, then John has a piano lesson.” Today ’ s Warm up - . roar buck time! what three things go into the introduction paragraph? also…we will be taking

Warm up - . multiply. divide. 9.5: adding and subtracting rational functions. objectives: you will be able to… add and

Warm-up - . - put your nametag on your desk. copy homework into your planner . use your prior knowledge to label the

Warm UP - . 1. what basic things do all humans have in common? -list all the answers you can think of 2. what do humans

Warm Up - . name one idea from the enlightenment that might make a people want to overthrow their king look at your

Warm up - . warm up. 1. work individual on the problem in your group in your notes. be ready to explain the problem

Warm Up( Add to HW) - Find the missing side length of each right triangle with legs a and b and hypotenuse c . 1.

WARM UP - . use your notes, book, and attached handout to complete the boxes on the “survival of the byzantine