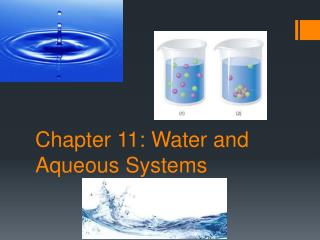 Chapter 11: Water and Aqueous Systems. Water and Its Properties. Water in the Liquid State The atoms in water are joined by covalent bonds The electrons in the bond between H and O are not shared equally Instead, the electrons spend more time near O and less time near H. Chapter 44 - . osmoregulation and excretion. overview: a balancing act. physiological systems of animals operate in a

Chapter 3 Chemical and Physical Features of Seawater - . water for life…. water facts…. most cells are 70-95% water