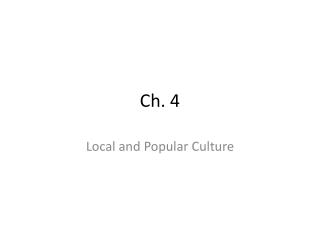 Ch 4 - . cell structure and function. the cell. the cell is the smallest unit of life that can carry out life processes.

Ch. 4 - . socialization. questions for consideration. which do you feel is more influential in development, nature or

Ch. 4 Sec. 4 - . aquatic ecosystems. nearly three-fourths of the earth’s surface is covered with water. almost all

Ch. 4 Sec. 4 - . changes in american society after the american revolution. new political ideas. by declaring its