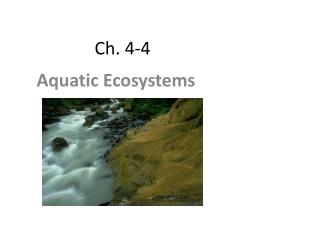 Ch 4 - . cell structure and function. the cell. the cell is the smallest unit of life that can carry out life processes.

Ch. 4 Sec. 4 - . aquatic ecosystems. nearly three-fourths of the earth’s surface is covered with water. almost all

CH 4 Section 4 - . the end of the revolution. he helped to turn the inexperienced soldiers into a strong fighting

Ch. 4 Sec. 4 - . changes in american society after the american revolution. new political ideas. by declaring its

Ch. 4 Module 4 - . sensation and perception. the five senses. what are the 5 senses? turn to your partner tell them if

Chapter 4 Calculation Used in Analytical Chemistry - . some important units of