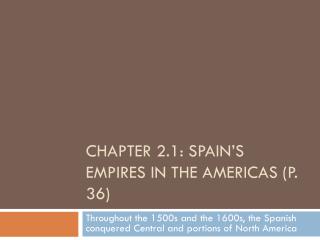 Chapter 2.1: Spain’s Empires in the Americas (p. 36). Throughout the 1500s and the 1600s, the Spanish conquered Central and portions of North America. One American Story (PG. 36) . Who is this author of this story? What is the main point of this story? When did this story occur?

Click the mouse button or press the Space Bar to display the information. - Chapter 1 the ancient greeks. click the mouse

Chapter 20 The United States Looks Overseas - . key terms for the chapter. isolationism avoiding involvement in other

The Colonization of the Americas - . i. spanish colonization a. the conquistadores: spanish soldiers who led military

Chapter 15: The West and the Changing World Balance - . ap world history ii. key concepts…. the decline of the arab