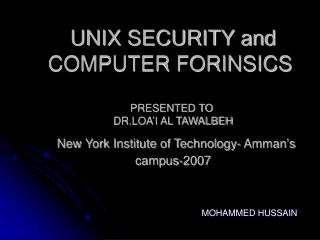 UNIX SECURITY and COMPUTER FORINSICS PRESENTED TO DR.LOA’I AL TAWALBEH New York Institute of Technology- Amman’s campus-2007. MOHAMMED HUSSAIN. An operating system. The OS is a program that acts as an intermediary between the user (application programs) and the hardware resources Shahad hussain - . otahuhuintermediate school. my culture. i am an indian boy who was born in a beautiful which lives in

Hussain Standwithdignity - Stand with dignity is a campaign to raise awareness about the state of our lives. what do we

Zakir Hussain - Development of an evolution and certification system for an environmental hub. zakir hussain. september

Syed Imtiaz Hussain - Discover. the leader. in you!. by. syed imtiaz hussain. agenda. introductions perceptions of

Syed Mudassar Hussain - . iict. 7102. console::. the line begins with console, which is the name of a predefined class