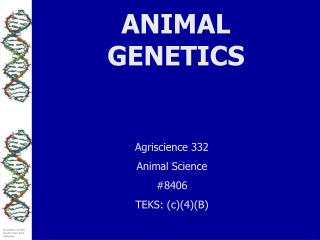 ANIMAL GENETICS. Agriscience 332 Animal Science #8406 TEKS: (c)(4)(B). Introduction. Genetics is the science of heredity and variation. It is the scientific discipline that deals with the differences and similarities among related individuals. Animal Genetics - . natural selection. an organisms ability to survive and pass on its genetic information to its

Animal Genetics - . animal genetics. differences in animals are brought about by 2 groups of factors: genetic and

Animal Genetics - . introduction to genetics. what is genetics?. the science of heredity genetics has also been described

Animal Reproduction and Genetics - . terminology. castration removing the testicles of the male to prevent breeding

Animal Reproduction and Genetics - . estrus cycle. time during which the female will accept the male for breeding length