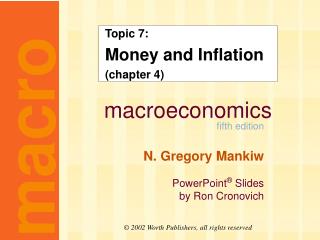 Topic 7: Money and Inflation (chapter 4). In this chapter you will learn. The classical theory of inflation causes effects social costs “Classical” -- assumes prices are flexible & markets clear. Applies to the long run. . U.S. inflation & its trend, 1960-2001.