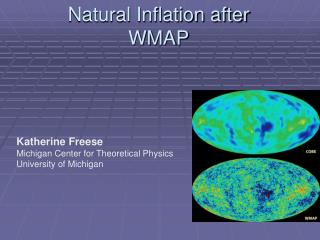 WMAP - . wmap. the wilkinson microwave anisotropy probe was designed to measure the cmb. launched in 2001 ended 2010

Post GP-WMAP Reionization: the morning after - . we need quantitative measures of epoch of reionization (z reion )

WMAP Cosmology - . courtesy of nasa/wmap science team map.gsfc.nasa.gov. before and after the first light. from cobe to

Inflation - . mr e mc kee jan 2002 as economics. what is inflation?. inflation is a sustained rise in the general level

Inflation - . another economic instability problem. meaning of inflation. is the rise in general piece level. not

Inflation - . chapter 14. impact &amp; measurement. if you were to ask a worker what he wants from his job, what