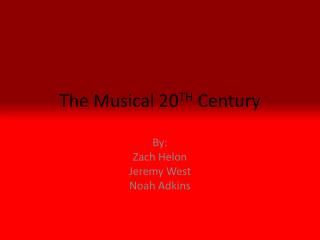 The Musical 20 TH Century. By: Zach Helon Jeremy West Noah Adkins. John Williams. Williams has composed many scores for hit movies such as Star Wars, Indiana Jones, and Jaws He was won many awards such as Grammys, Golden Globes, and Emmys. Imperialism, Colonialism, and Resistance in the Nineteenth Century - . imperialism in the nineteenth century change and

Higher Education in the New Century: Themes, Challenges, and Opportunities - . a social transformation. the 20th century

EXAM ONE - . review question. 1. the first building application of warm air, central heating occurred in which of the

Lecture 10 - . eugenics and genetics: excitements (philosophical perspectives). “ the 21 st century will be the century

As the Century Turns… - . anne carter toss section 04. description: ss5h3 the student will describe how life changed in

Musical Genre Classification - . prepared by elliot sinyor for mumt 611 march 3, 2005. table of contents. what is genre?

Teaching In the 21 st Century - . 1. how did your education and training prepare you to instruct 21 st century learners?

Musical Instruments of the orchestra - . by: amina boudjellel 7x1. did you know? early humans made primitive instruments

Musical Instruments of the Symphony Orchestra - . history. the first type of orchestra were groups of instruments that

Resources for Teaching and Learning - . diction. james f. daugherty the university of kansas. from a musical / artistic