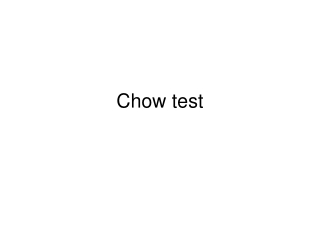 Chow-Chow - . chow-chows are listed as a restricted breed. this is due to their temperament also they are prone to

Chow Chows - . by. lydia demes. fun facts. chow chows have been around for 4,000 years! chows have blue-purple tongues 3.

Stephen Chow - . in fact i was an actor. dahuaxiyou is a classic. the beauty of the purple xia pretty woman and sovereign

Some Chow we Loved - We eat every day, but some foods just make a longer impression on our hearts and stomachs. my team

Curtis Chow Memorial Fund - . nov 2011 update. great n ews …. as a response to the overwhelming generosity from the

Chow Mien and Bacon Bowl - Perfect combination. check us out at the ground floor of greenbelt 1 and 3rd floor ayala north

How To Make Puppy Chow