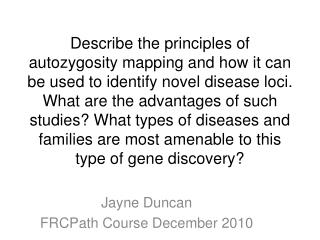 Describe the principles of autozygosity mapping and how it can be used to identify novel disease loci. What are the advantages of such studies? What types of diseases and families are most amenable to this type of gene discovery?. Jayne Duncan FRCPath Course December 2010. Autozygosity.

After being persuaded to kill Duncan… - . macbeth has a brief discussion with fleance , banquo’s son there is then