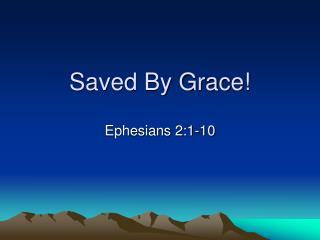 Grace and the Time Machine - . compiled by: terry sams pes. from starring grace by mary hoffman adapted for story theater

THE PRIESTLY GARMENTS OF GRACE - . lesson 5 for april 30, 2011. clothed in the high priest garments. aaron , a privileged

GBI Basics of Grace Summer 2010 - . an overview of systematic theology. why studying theology is so important. the

Eph 2:7 that in the coming ages he might show the immeasurable riches of his grace - In kindness toward us in christ

How Are We Saved? - . 7. salvation: east and west. i will sing to the lord, for he has triumphed gloriously; the horse

Introducing… - . grace adele. what is grace

How Are We Saved? - . 5 . eternal security, blessed assurance. or