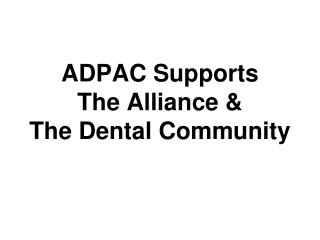 ADPAC Supports The Alliance & The Dental Community. ADPAC: Who are we?. ADPAC is the voice of thousands of dentists who care deeply about their patients and their profession. ADPAC’s primary purpose is to elect candidates who understand the importance of dentistry and are committed to COMMUNITY DENTAL HEALTH - . statistics. statistics is the field of study which concerns itself with the art and science

Check In, Check Out - . an evidence-based intervention for tier ii supports. educational and community supports.

Alliance of Community Associations - . our mission statement: the mission of this organization is to preserve the