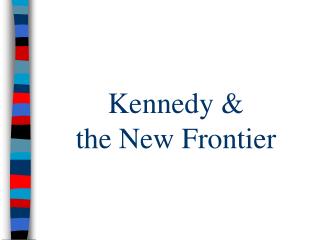 Kennedy & the New Frontier. JFK’s New Frontier. But, it was not the 1 st time TV influenced politics…. The election of 1960 between Richard Nixon & John F. Kennedy was the 1 st to use TV debates: Nixon was much better known but the TV debates helped swing undecided voters towards JFK The life of John F. Kennedy - The life of the 35th president of the united states, to mark the centennial of his

Nomads Introduction - . hugh kennedy: “the nomad paradox” traditionally, who were the most powerful people? those

THE NEW FRONTIER AND THE GREAT SOCIETY - . kennedy and johnson lead america in the 1960s. the emergence of j.f.k. the