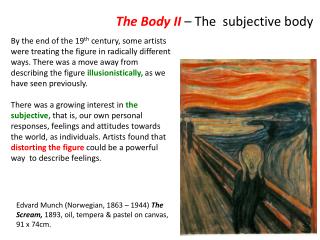 By the end of the 19 th century, some artists were treating the figure in radically different ways. There was a move away from describing the figure illusionistically , as we have seen previously. Theology of the Body - . part i patristic thought, the reformers, eugenics, casti conubii and humanae vitae.

Homeostasis and Human Body Systems - . imagine you are playing softball on a warm summer day. write down two ways that

Muscles of the Body - . chapter 11. interactions of skeletal muscles. the arrangement of body muscles permits them to

SKIN ART - . the term “ body art ” is actually a broad term used to describe any method of expression that alters the

Chapter 9 - . mechanics of biological materials: stresses and strains on the body. loads. the external forces that act on